A day trip to Vestmannaeyjar Islands

I highly recommend for everyone visit the Vestmannaeyjar Islands if you are staying or travelling in the South of Iceland. 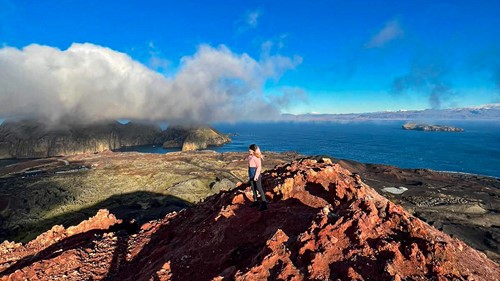 Most of the islands are with high cliffs and green grass on top. A perfect nesting place for various types of seabirds during summer. Most famous is the friendly Puffin which is a trademark for the islands. The sea around the islands is full of life with a lot of fish and whales and endless food resources for humans and birds.

The biggest island of the Vestmannaeyjar is the island Heimaey it has through the centuries been a home of the fisherman and their families. The name Vestmannaeyjar is related to the settlement time of Iceland about 1200 years ago. Vestmanna is the people from the west meaning people from Scotland and Ireland, they might have been living in Iceland before the Vikings came but also it might be because of slaves brought by the Vikings who were living there.

The saga tells about Irish slaves running out to the islands after killing Hjörleifur the brother of Ingólfur the first official settler of Iceland. Ingólfur follow them and killed them on the Islands. Ingólfur settled in Reykjavík where we have the capital city of Iceland today.

Going with the ferry Herjólfur

2009 was the year that a new harbour Landeyjahöfn was opened on the black sand beach across from the Vestmannaeyjar. Before the ferry had to sail from Þorlákshöfn town in the southwest.

This new harbour was a breakthrough for the people living in the Vestmannaeyjar and people visiting the islands because it made the sailing time much shorter than before. Now it only takes the ferry around 30 minutes to sail across between the Landeyjahöfn harbour to Vestmannaeyjar. Making it a perfect location for a day tour or staying for some days on the islands. 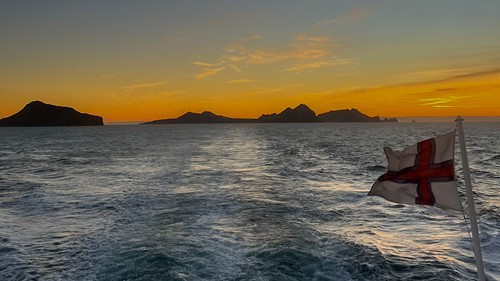 During summer it is a reliable transfer with many tours during the day, from early morning until evening. During winter there can be more difficult to relay on the ferry due to bad weather and bad conditions in the harbour. So if you are visiting the islands in winter you should check the condition.

The name of the ferry, Herjólfur is related to the Viking Herjólfur that settled the Vestmannaeyjar during the settlement time of Iceland. The new ferry is partly run by electricity making it more environmentally friendly.

As mentioned before the Vestmannaeyjar is a paradise and a great place to visit especially during summer when the islands are full of life. You can go for a day tour to see the highlights of the islands but for seeing more and going deeper into nature and history you need at least two days.

Preparing for a visit

The most important is to plan your day well, it is important to see about the availability of the ferry both ways. There are big events happening in the Vestmannaeyjar during summer, big soccer tournaments called Pæjumótið and Pollamótið. making it hard to get a space on the ferry. 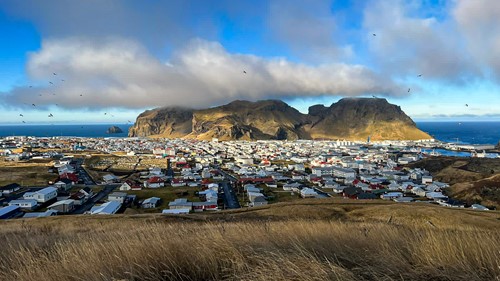 The biggest event is the Þjóðhátíð festival taking place at the first weekend of August. It is an endless party starting on Thursday and going on until Monday. The Þjóðhátið festival is a music festival representing famous Icelandic bands. It also includes big fireworks shows, a huge bonfire and an event called brekkusöngur where at least ten thousand people gather in the valley Herjólfsdalur and everyone sings together old Icelandic songs.

If you like to visit Vestmannaeyjar during Þjóðhátið you need to book your ferry ticket way ahead as well as book a ticket to the festival. Here is a link to the festival Þjóðhátíð 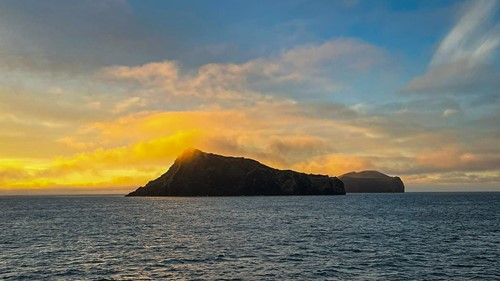 Besides these big events at weekends, you can easily visit the Vestmannaeyjar. It is best to book your ticket with a few days of notice so you can be sure to get your place on the ferry both ways.

Your transportation in Vestmannaeyjar

You must decide if you should bring your rental car or not with you on the ferry. If the weather is nice and you like to walk you can leave the car and go on foot to Vestmannaeyjar. Most of the interesting places are reachable by foot, but if you need faster transport, you can take a taxi, rent a bike, or join a tour around the islands.

The harbour area in the Vestmannaeyjar is full of life. A lot of boats and ships related to fishing and tourism, restaurants, fish production, birds and people. It is a nice place to walk around and discover life and the locals.

From there it is nice to walk around town. Explore how people live and take some photos. You can find shops, galleries and restaurants downtown.

If you walk towards the north part of the town you shortly arrive at the lava field formed during the volcanic eruption happening on the island in 1973.

The volcanic eruption in Heimaey 1973

It was during a dark winter night in February 1973 when people in the Vestmanneayjar felt earthquakes, something they were not us to. An old man living on the island at that time told me his experience from that night. He was living with his family in a house located outside of the town. He was in bed with his wife when they felt a big earthquake. Because it was something he was not used then he went out of his bed and looked out the window of the bedroom, and he saw nothing so he looked at his wife and then again out through the window and then he saw the ground opening up and lava starting to flow out from the ground about 400 meters from his house.

He was not sure what to do. He got the family together as fast as he could, and they ran down to the harbour like everyone did that night. The volcanic fissure was getting bigger, and more lava flowed down the hills. Everyone got together down at the harbour, it had been bad weather the day before so all boats and ships were in the harbour that night, making it easier to evacuate the island as fast as possible. The old man told me when he was with his family down at the harbour his wife asked if he brought his wallet and personal items with him, but he didn´t so he ran back to his house to get what they needed before going on a boat away from the volcanic eruption. But when he came back down to the harbour he realised he had mostly brought something that would not be of any use to the family, his mind was out of order.

This eruption was something that no one was expecting, everyone believed the old volcano Helgafell mountain was not active anymore. In the end, the lava made Heimaey island about 25% bigger than before and a new mountain was formed the volcano Eldfell (the fire mountain). About 400 buildings and homes were destroyed because of lava and volcanic ash.

During the volcanic eruption, they started to cool down the lava flow by pumping sea to the lava, by doing that they were able to slow down the lava flow and point it away from the town. It took a long time to clean and rebuild the town after the volcanic eruption stopped. Many people did not return both because their house was destroyed, but also because of the terrifying experience they had. Before the population in the Vestmannaeyjar was around 5000 people after it never reached the same number, today it is still a little bit below that number.

Skansinn is a place down by the harbour it was built as a fortress to protect the inheritance from pirates attacking the island in 1760 ??. At that time pirates from Algeria sailed to the coast of Iceland and killed and attacked people, as well as taking people with them back to Algeria. This atburður made the people scared and they felt they needed to protect themselves from future attacks.

This happening is referred to as Tyrkjaránið because people believed the pirates came from Turkey, later when some people that had been kidnapped made their way back from Algeria people go the true story about where these pirates came from.

Stafkirkjan is a rebuilt model of an old traditional Viking church, it fits well into the surroundings and is a good place to stop and view the mountains by harbour and seabirds and the harbour area.

Sprangan is located by the cliffs on the south sight of the harbour. It is a place where the locals practice a local activity related to the skills to climb the rocks and collect eggs from the sea birds and rounding up the sheep in the old days. It is in a way a place to practice basic skills using ropes and climbing and at the same time not to be afraid of heights.

Heimaklettur is the highest mountain by the harbour. It is possible to hike up to the top, you need to have good balance and not be afraid of heights, a part of the trail is steep as well as with a steep ladder. But the rewards are good if you do this hike. You get amazing views over the island, surrounded by birds and sheep.

The two volcanoes are one of the main attractions in the Vestmannaeyjar. The old one is Helgafell it has not been any volcanic activity there for thousands of years. The other volcano Eldfell was formed during the volcanic eruption in 1973. There is still some heat coming from the ground there and that heat could be used for many years after the eruptions to heat water for the people on the island. Eldfell and Helgafell are both amazing viewpoints for the islands as well as to the mainland in good weather conditions.

Stórhöfði is a mountain on the northeast side of Heimaey island. It is mostly known for the strong wind and the lighthouse located there. During winter the wind meter at Stórhöfði often shows record windspeed, but during summer Stórhöfði is a peaceful home for thousands of seabirds and the birdwatching shelter there is the perfect place to sit down and admire the birds nesting and taking care of each other. A place for nature and bird lovers.

The swimming pool at the sports centre in Vestmannaeyjar is a good place to go to enjoy the warm water and take a swim in the seawater swimming pool. It is good for children to play with outdoor climbing walls and waterslides.

Eldheimar is an expedition built around the volcanic eruption in 1973. It is a great place to get to know the history of the islands and the atburðina that happened and how it affected the lives of people. Everyone visiting Vestmannaeyjar should visit Eldheimar.

As mentioned before Vestmannaeyjar is a great place to visit for bird watching. It is easy to see many types of birds in a short time, and many of the bird types are in big numbers, thousands of birds and during summer they are mating, nesting and taking care of their families. All is full of life and the nature and surrounding with the midnight sun make it even more amazing.

The most famous bird on the island is the Puffin, with its friendly appearance. But you can also find, súla, langvía, stuttnefja, and many types of gulls ……………………….